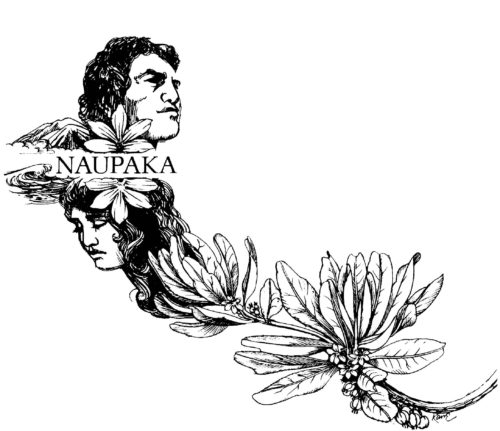 There are two varieties of the Naupaka, one growing near the sea called Naupaka Kahakai, the other in the mountain is called Naupaka Kauihiwa. Each bears what appears to be half of a blossom and when placed together, they form a perfect flower.

There are several Hawaiian legends about these curious blossoms.  One story tells of two lovers, forever separated by the vengeful wrath of the Volcano Goddess Pele (pronounced peh-le).
Pele’s home is believed to be Halema`uma`u Crate at the summit of Kilauea on Hawai`i Island.  Pele had a very beautiful and loving sister named Princess Naupaka who she was jealous of because the people loved her.
One day Princess Naupaka was walking on the beach and noticed a very handsome young man standing in the water.  When their eyes met, he smiled and told her his name was Kaui and she fell instantly in love with him.  Naupaka went to her sister Pele to ask permission to marry Kaui. Pele told her sister she would go down to the beach the next day to meet this young man and would make her decision then.
The next day when Pele saw Kaui, she found him very pleasing and decided she wanted him for herself.  Pele told Kaui he had to come live with her.  Kaui replied, “I cannot for I met your sister, Princess Naupaka, the day before and I love her.”  Enraged, Pele chased the couple up to the moutain, hurling fiery lava after them.  Princess Naupaka, took a blossom from her hair, ripped it in two and gave Kaui half. Pele’s other gentler sisters, took pity on the young man and transformed him into the Mountain Naupaka, the same blossom Princess Naupaka was wearing in her hair.  Pele then turned her vengeanceon her sister, chasing her down to the ocean. Once again her sisters intervened and transformed the princess into Beach Naupaka.
Both Naupaka plants exist today; one on the shore and the other up on the mountains, each blooming as half flowers.  It is said that the lovers can be reunited when the flower of the Naupaka Kuaihiwi and the Naupaka Kahakai are joined together after they have been picked.