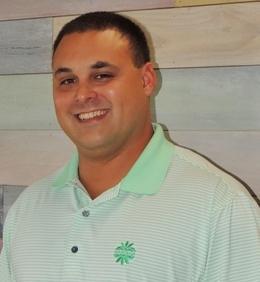 Everett’s favorite golf movie is “Caddy Shack,” and it’s easy to see why. A gregarious guy, he seems to enjoy the fun of golf, along with the business.

A graduate of the University of San Diego with a Bachelor of Business Administration, Everett came to the Waikoloa Beach Resort golf team by way of the Administration offices, where he worked for two and a half years in Accounting.

The move to operations was a good one for him. “This is half office, half outside—and it’s much more fun,” he says. “I try to focus on the mix between the Golf Shop and working in the cart barn with the maintenance guys.” He works a lot with scheduling the staff in both shops, and—like Jaylene and the rest of the team—fills in wherever he’s needed.

Originally from Oahu, Everett did not play golf as a kid, or in high school. In fact, he was a starting fullback at Kamehameha Schools, selected in 2000 as one of 14 inductees into the National Football Foundation and College Hall of Fame.

As for his golf game, Everett says his brother started him off at Kahuku Public Golf Course. “My brother showed me the basics,” said Everett. “The rest is ‘Happy Gilmore’ style.”

Website Design by Gum Design LLC
Back To Top